October baseball is undoubtedly one of the most exhilarating and exciting three week stretches in the world of sports. Heroes are born, scapegoats emerge, and teams are etched into the history books. Reggie Jackson, Bill Buckner, and the 2016 Chicago Cubs are seemingly synonymous with the playoffs. The fight for the Commissioner’s Trophy never ceases to amaze even the most casual of fans. As October quickly rises on the horizon, 10 teams will begin their journey in hopes of bringing a title to their city.  But who will emerge victorious? If the season were to end today, here are the ten teams that would make the bracket, along with other teams on the bubble, and a breakdown of their chances of hoisting the trophy.

Let’s start with the American League,

The Red Sox lineup features TWO candidates for the Most Valuable Player award, an extremely rare occurrence. First year Red Sox player J.D Martinez leads the league in home runs and RBI (Runs Batted In). And Mookie Betts, who is widely considered to be one of the best players in the game, leads the league in batting average.  Topping off the loaded roster is All-Star Game starting pitcher Chris Sale: arguably the most dominant pitcher in the league over the past few years, and a nightmare for any opposing offense.

From top to bottom, the Red Sox are a dangerous team, and will have home-field advantage throughout the playoffs. They are not an ideal matchup for any other team in the league.

The defending champions are back, and are even stronger than last year.  Led by reigning AL MVP Jose Altuve (above), the Astros are looking to become the first back-to-back champions since 2000.

Future Hall of Famer Justin Verlander and former Cy Young Award Winner Dallas Keuchel lead an elite level pitching staff, and that alone makes Houston a tough matchup. Pair that with an offense, captained by Altuve and 2017 World Series MVP George Springer, that is near the top of the league in every major statistical category, and you are looking at a team with no Achilles heel to exploit.

After an astounding 100 win season last year, the Indians were bounced out of the playoffs in the first round last year.  While they may not win quite as many games this time around, Cleveland still managed to dominate their division, leading by upwards of 15 games for the majority of the season.

Jose Ramirez has enjoyed a breakout year, and is in the MVP conversation after hitting 40 home runs and leading his team’s offense. Francisco Lindor (above) is once again one of the best shortstop in the game.  But the teams real strength is their pitching. Corey Kluber is once again one of the best starting pitchers in all of baseball, and left-hander Andrew Miller leads a stellar bullpen that can single-handedly win games for the Tribe. Should the pieces fall into place for Cleveland this year, another first round exit may be out of the question.

The MLB’s all time championship leading (28) New York Yankees are as strong as ever, and have the third best record in the league.  Although they aren’t leading their division (because they are in the same division as the Boston Red Sox), the Yanks will comfortably make the playoffs and have the talent to potentially win number 29.

Led by their two massive sluggers Giancarlo Stanton ( the reigning NL MVP) and Aaron Judge (the reigning Rookie of the Year), the Yankees are a home run-happy team that can change the course a game on any given swing. New York’s bullpen is an overpowering force as well, with 3 All-Stars ready to come in and shutdown an offense whenever needed.

A team that has been flying under most people’s radar this season, the Athletics have quietly been keeping pace with the best teams in baseball.  Oakland hasn’t won a title since 1989, but have a group of young talent that are looking to change that.

The A’s are led by power hitting extraordinaire Khris Davis (above), who is in contention for the league lead in homers. Davis is a threat to go deep on every pitch. The ace of their pitching staff, Sean Manaea, is one of only two pitchers to throw a no-hitter in 2018. The Athletics will have to finish strong to secure a spot in the playoffs, but if they get on a roll it will be interesting to see just how far this team can go.

Now onto the National League: 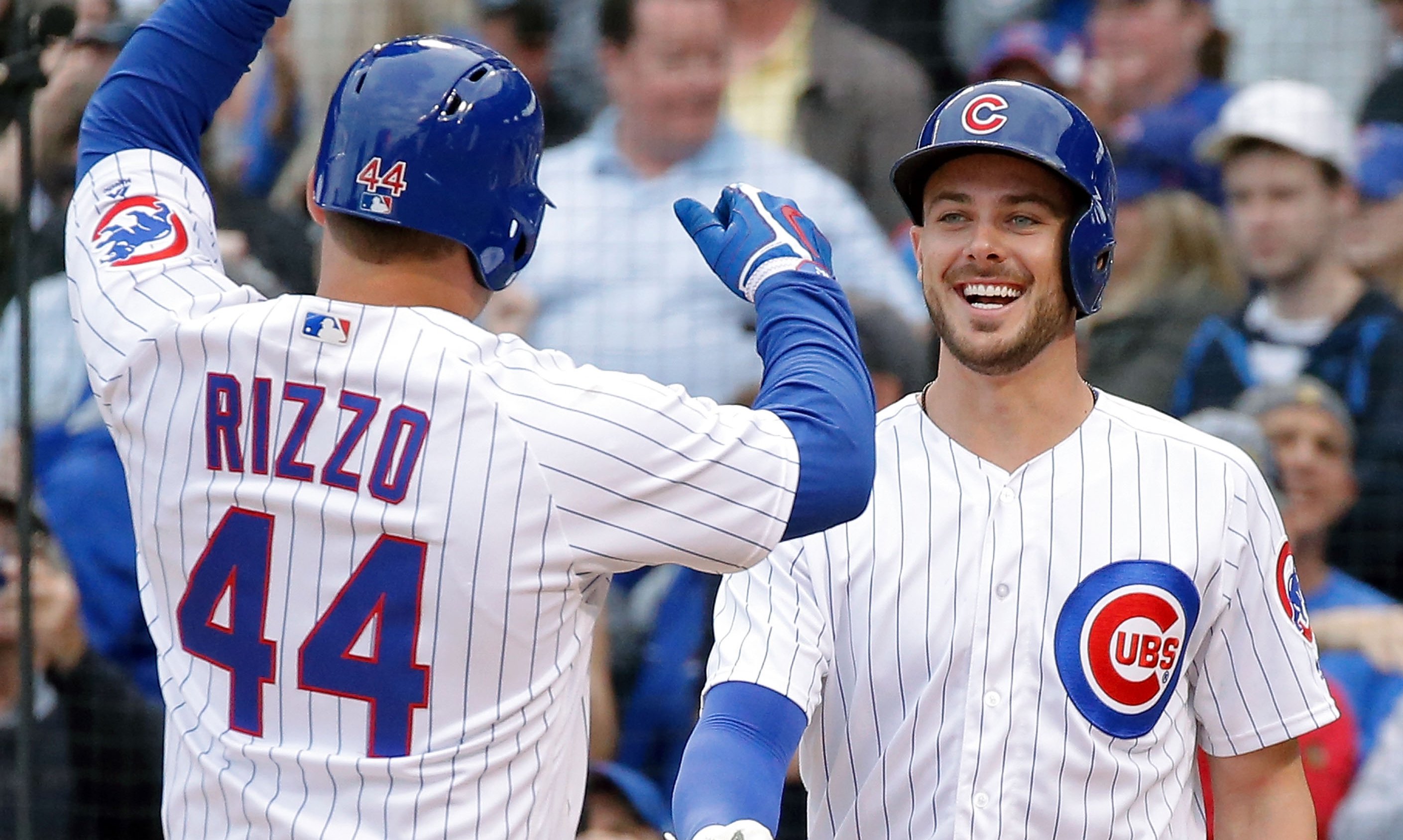 The Chicago Cubs waited 108 years in between World Series titles, and finally broke the curse in 2016.  They believe they won’t have to wait nearly as long for the next one. Chicago is a strong contender once again this year, and the city is confident their team can bring another championship home.

Perennial All-Stars Anthony Rizzo (above left) and Kris Bryant (above right) are as rock-solid as you can find, and have placed their offense atop the league in runs scored. Javy Baez has had an exceptional year, and is the running for NL MVP.  Manager Joe Maddon has loads of playoff experience, and is an expert at making the right decisions when they really matter.

Chalk-full of young talent, the Braves have burst onto the scene in 2018. During the preseason, there weren’t very many who chose them to even be a playoff contender. Now Atlanta leads their division and are looking ahead to October baseball.

While Atlanta is led by All-Star Freddie Freeman (above) and fourteen year veteran Nick Markakis, it is the young talent that just might be the key to this years success. 21 year old Ozzie Albies and 20 year old Ronald Acuna Jr have taken the league by storm, and will provide a major spark in the playoffs. Acuna Jr is a frontrunner to win this year’s NL Rookie of the Year award. Both are stellar on both sides of the ball and will be key to Atlanta’s success.

The Brewers will likely be heading to the playoffs for just the 5th time in franchise history, and hope this will be the year for them to capture their first ever World Series title. Milwaukee made it clear they were all in this year by being far and away the most active team at the trade deadline, acquiring a variety of pieces they believe can propel the team in the playoffs.

Along with established veteran Ryan Braun and All-Star Christian Yelich, the Brewers traded for two high caliber offensive weapons at the deadline in Mike Moustakas and Lorenzo Cain, who both have World Series experience. 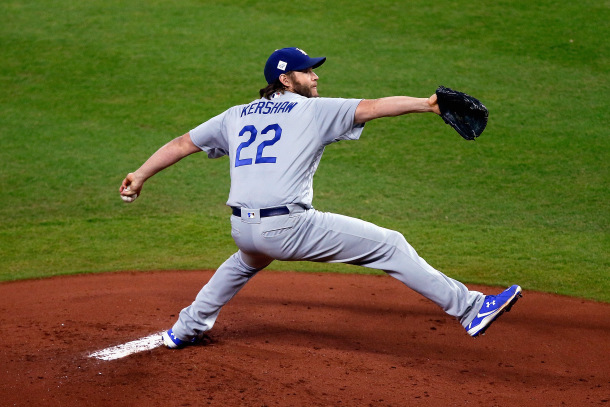 Last year, the Dodgers made it to the World Series, but ultimately suffered a heartbreaking loss to the the Astros in Game 7. But the past is the past, and LA hopes to take that final step and capture this years Commissioner’s Trophy.

Playing under the bright lights of a city like Los Angeles, you need a team full of superstars that can handle the pressure. The Dodgers more than fit that bill. The roster boasts both the 2016 AND 2017 Rookie of the Year award winners in Corey Seager and Cody Bellinger, but they are just the tip of the iceberg.  Yasiel Puig is one of the most exciting players in baseball, and MVP candidate Manny Machado was acquired at the trade deadline. As if that wasn’t enough starpower, star pitcher Clayton Kershaw (above) is already considered to be among the greats of recent memory, and is a threat to shut an offense down every time he toes the rubber.

This years’ higher level of competition has them fighting for a playoff spot, but should they get in, this team has everything necessary to be playing deep into October. 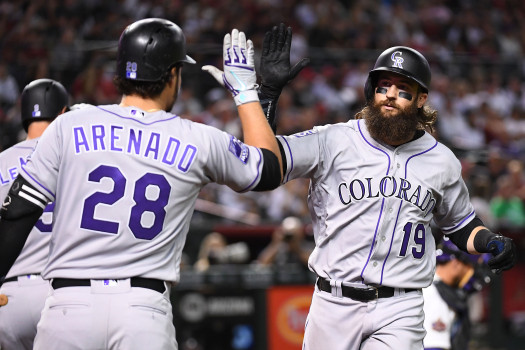 The team from Colorado has reached the top of the mountain in their division (pun intended). Despite not gathering the media attention of some other contenders, the Rockies are right up there with the top teams and have aspirations of winning the first World Series in franchise history.

Nolan Arenado (above left) has ascended to an elite level, and anyone will have a tough time arguing against the fact that he is the best defensive third-basemen in the league. All-Star outfielder Charlie Blackmon (above right) is an exceptional leadoff hitter, and the duo can carry the Rockies offense on any given night. If the pitching staff can hold up against playoff caliber teams, the Colorado offense has the capability to take over the game.

Being in what is widely considered the most competitive division in baseball, the Cardinals have been flying under most people’s the radar this year. Yet at 14 games over the .500 mark, they have put themselves into the playoff push. The last 2 weeks of the season will be crucial, as there is just a 5 game difference between the top 6 teams in the National League.

St.Louis has a roster chalk-full of veterans that have playoff experience. Yadier Molina is a future first ballot Hall of Famer, and was on the 2011 team that won the World Series. As was Matt Carpenter (above right), who currently is enjoying a major breakout year and is a leader in the conversation for NL MVP.  Perhaps the team’s most interesting storyline is the development of pitcher Jordan Hicks. The 22 year old has become known for his flaming fastball, and tied the record for fastest pitch in MLB history at an astonishing 105 mph.

Come October, the pressure will be on, and every pitch could be the one to make or break a teams season. Players will be pushed to their limits, and fanbases will be on the edge of their seats. October 2nd can’t come soon enough.